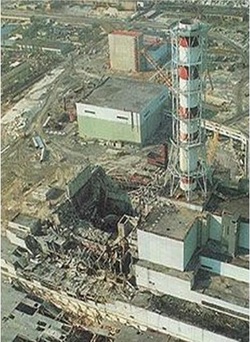 The Chernobyl nuclear power plant lies 65 miles to the north of the city of Kiev in the Ukraine, and close to the border with Belarus.

On Saturday the 26th April 1986 at 1.23 a.m., while safety tests were being conducted on Reactor No. 4, a couple of huge shudders were felt in the control room just before the alarm systems went haywire. The reactor had overheated and set off two explosions. The first destroyed the reactors cooling systems, the second blew the 1,000 tonne cover off the reactor and exposed the nuclear core to the outside world. The fire, caused by the second explosion, raged for over 3 days and sent a plume of highly radioactive fallout, estimated at almost 50 tonnes of vapourised nuclear fuel, into the atmosphere. With it the future health, prosperity and dreams of hundreds of thousands of people were irrevocably changed as their world fell into the shadow of Chernobyl’s nuclear poison.

The Soviet government initially attempted to cover up and downplay the incident, however following a great deal of international pressure the full horror of the incident was released.

A huge area around the plant was devastated by the explosion and the ensuing radioactive contamination spread over neighbouring countries and throughout Europe (including the UK). Four hundred times more radiation was released than had been by the atomic bombing of Hiroshima. 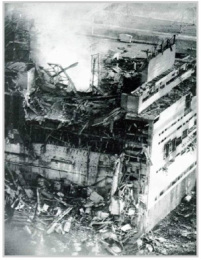 It is now known that 60-70% of this fallout, largely washed out of the skies by rainfall, settled onto the agricultural lands of Belarus to the north of Chernobyl.

Once know as the bread basket of Europe, these contaminated lands are no longer commercially viable, and what little agriculture remains is used to feed the local population. In places cattle still graze the land providing milk and meat. Poverty ensures that the people continue to be exposed to the radiation through the local food chain.

The innocent children of Belarus, Ukraine and Russia are the victims of this nuclear catastrophe. An estimated 700,000 children currently live on this contaminated land. These children, Chernobyl's Children, will  continue to suffer for 25,000 years.

Although now covered by a crumbling concrete sarcophagus, the reactor continues to leak low levels of radiation into the atmosphere.

The impact of the disaster 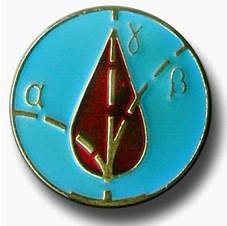 In the immediate aftermath of the disaster over 336,000 peolpe were moved from their homes, often with only a couple of hours warning, to areas outwith the contaminated zones. 434 towns and villages in Belarus alone were affected in this way. Many believed that they would one day return to their homes, but very few have been able to do so.

Over 600,000 "liquidators" were drafted in to help with securing the power plant, moving people away from contaminated areas, cleaning up the radiation and encasing the reactor in its concrete sarcophagus. The Liquidators Emblem (right) shows the alpha, beta and gamma radiation symbols over a drop of blood. Some spent as little as 6 months working in the area, others over 4 years. Many of the liquidators, mostly young men in their 20's & 30's at the time, have gone on to have health problems associated with exposure to high levels of radiation, and it is common to find that only a handful of them survive today in their 50's & 60's from their original large work parties. There is a memorial at the Chernobyl plant to the liquidators which reads "To those who saved the world".

Whole villages were levelled and burried under 3 feet of earth, wiped off the face of the earth forever (see the Village Memorial below marking where one such village had stood). 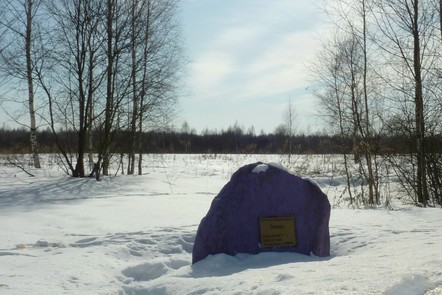 The overall total number of deaths caused by the disaster is impossible to calculate.

We know that 31 people died as a direct result of the explosions and the immediate support from the fire, medical and military services. 28 of them having been so contaminated that they had to be buried in lead lined coffins with lids soldered on to seal them up.

Estimates on the death toll to date vary from 62 (International Atomic Energy Authority) through to 998,000 (Greenpeace). The true number will lie between these estimates and must be in the 10's if not 100's of thousands.

The impact on general health in the affected areas has undoubtedly been significant.There has been a well documented increase in problems across the region including increases in;

Due to the lack of proper equipment and medicines in Belarus, the effective treatment and care of many of these illnesses is impossible. Even simple medicines like aspirin, paracetamol and antibiotics are expensive and difficult to obtain.

Recent studies tell us that over 90% of children in Belarus who live in the contaminated zones suffer from vitamin deficiency.

There are no signs that the health of the population is improving with time, indeed for the first time in Belarusian history the death rate now stands higher than the birth rate.

Across Europe restrictions exist to this day on land contaminated by the fallout from Chernobyl. In the UK, parts of England and Wales have recently decided to maintain their restrictions, with the last of the Scottish restrictions having been lifted in 2010. 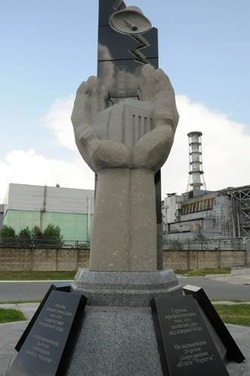 Ten days after the disaster a further risk immeasurably greater than the initial explosions was identified. Initially firefighters had unsucessfully used water to try to extinguish the flames from the reactor. This contaminated water had pooled beneath the reactor core which, having had a combination of sand, clay and boron dropped on it in an attempt to smother the flames, had turned into a lava like substance. This lava was slowly burning through the foor of the reactor, and had it reached the water below would have set off a massive thermal explosion that would have had devastating consquences across most of Europe.

Valeri Bezpalov, Alexie Ananenko and Boris Baranov volunteered to use SCUBA equipment to swim through the pooled water to find and release the safety valves for the sluice gates to drain this water away. The men knew that the levels of radiation under the main reactor in the water would be lethal. All that they asked was that their families be taken care of after their deaths.

The men were successful in their mission, even though Boris's lamp failed shortly after entering the water, but not before finding the pipes that the divers then followed in the dark to the safety valves. They returned from the pool to see their colleagues and those in charge of securing the safety of the plant "jump for joy". Alexei was even able to be interviewed by the Soviet media, but gave away no sign of the dreadful radiation poisoning that all three of them had received, or the fate that possibly awaited them.

Months later it was established that the molten lava did indeed burn through the reactor floor. The action that these three men had taken almost certainly saved the lives of hundreds of thousands of people throughout Europe.

On the right you will see the "Memorial to the Lost Workers of Chernobyl" with Reactor No.4, covered by the concrete sarcophagus, in the background. Radiation levels around it are 5 times higher than normal and increase exponentially as you step towards the reactor.